Artworks, exhibited within the scope of CYBERFEST 2008, represent the variety of new technologies. Video installations, robotized toys, sculptures and objects with complex electronics — all this spectrum of highly technological art tools presented at the festival and used by artists to ask a question about interrelations of man and technology, biological and artificial, live man's experience and its limits.

Cult installation by the father of pop art and one of the most famous XX century artists Andy Warhol «Silver Clouds», and in the same time it is one of the first (1966) high-tech art works. Clouds — balloons, filled with mixture of air and helium, float in the streams of air, vibrating from the touches of visitors, reflect everything around themselves, creating «heavenly», joyful mood, launching a challenge against usual expectations. «Silver Clouds» became an emblem of pop art parties. 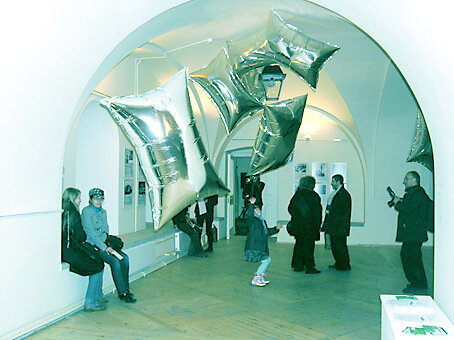 «Silver Clouds» at the Peter and Paul fortress

Mechanical «tide» — is one of the most famous and impressive installations of Brose Partington (it opened SCOPE-2007 art-fair in New York). «Waves», made of the «junkiest» material — black plastic bags — become «alive», blowing up or «crawling» back because of man's steps. Citizen suddenly finds himself near the robotized «breaking wave». 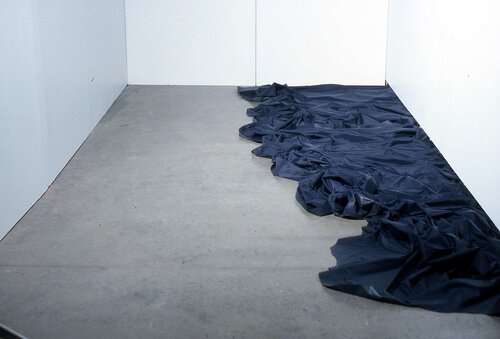 «Field of Grass» by Ryan Wolfe is not stretched under your feet, but grows on walls. Dozens of computerized glass boxes, filled with soil, where grass grows. All boxes connected in a network, controlled by electronics, which makes blades of grass move in synchronous rhyme, like they are bending under the breath of invisible and imperceptible wind. All together those elements create a media sculpture, which visually demonstrates streams of information as a new kind of nature, created by man. 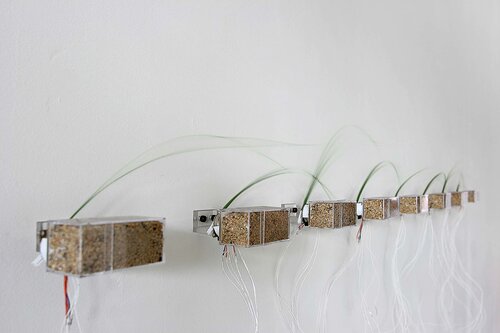 «Field of Grass» at Damstuhltrager gallery

Computer technologies bring new life to old things. With the help of special hardware, an ancient soda machine turns into stylish multimedia device, a kind of time machine. Viewer switches this mechanism on by dropping 3 real soviet kopecks, receiving not a glass of soda water after that, but a nostalgic video about relativity of time. 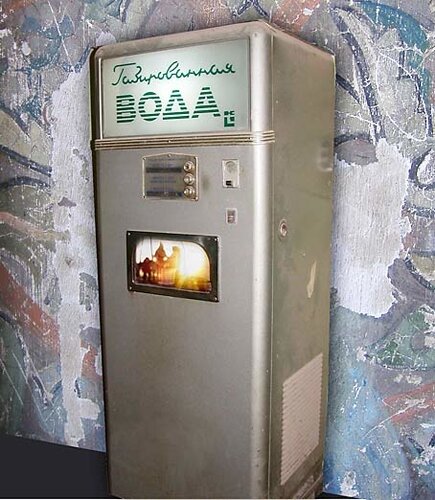 Project concept: displaying realtionship between the space and the viewer, changes of space in the process of perception viewer's movements (motion, hand moving, etc...); development of system to perceive audio-visual art, where viewer becames the author himself, the main character of an interactive audio-visual performance.

Realization: a video stream from the PC with connected web camera, being transmitted to the projection screen using the multimedia projector. When viewer appears in the working zone of a web camera, he sees himself on a projection screen, surrounded by transparent squares (squares exist only on projection screen). Installed on PC program analyzes movements of a viewer. When viewer and square become in contact on the screen, a sample corresponding to the square, as in musical instrumesnts, is playing and a primitive geometrical element being added to the image on the screen. After the series of contacts the space of the exhibition becomes filled with sounds and the screen is filled with abstract suprematic collages. 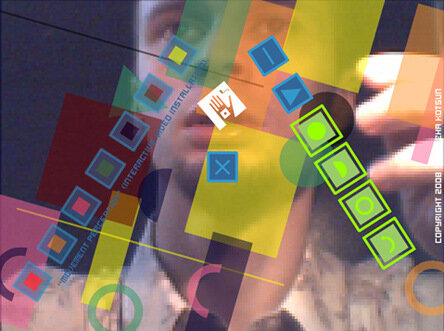 Zlata Ponirovskaya disembowels toys — tears off plush skin, picks out plastic eyes, pulls away foots and wings. Cauterizes wounds with epoxide resin, pours with acidic dyes, puts cheap mechanics and a battery to the opened chest — and with a clear conscience releases the newborn creature to the boundless world.

From those semi-mechanized, semi-computerized golems-hybrids, artist creates either army or zoo, thinking about border between living and lifeless, about distance between man and machine, about things that can happen if machine goes out of control. 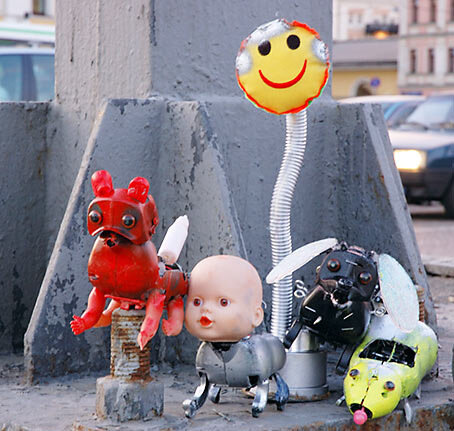 Robot animals by Zlata Ponirovskaya at the State Hermitage Museum

Interactive installation by Vladimir Smirnov-Lilo devoted to interrelations between an artist and a world. Viewer stands behind a barrier, armed with pneumatic gun. In front of a viewer, over the barrier, there is a projection screen with image of an artist, looking at him. Viewer is offered to shoot the image. He faces the problem of choosing: either he'll shoot or refuse to shoot. He hits the aim or misses. Artist on the screen reacts to the bullet hits. What to do? — This is the problem of choice. Art is more humane than life, show must go on, artist is alive and performance continues. 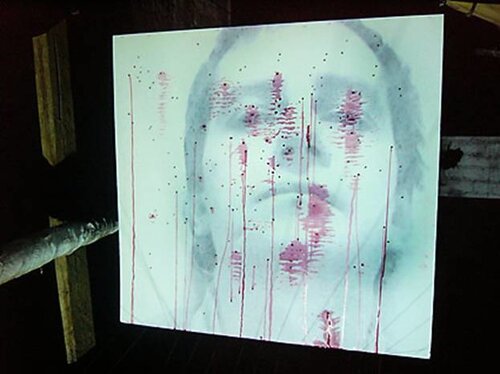 «37» at Belka and Strelka gallery

Entering in a contact with an object, man obtains a possibility to observe in real time, changes in activity of his right and left side, predominance changes, fluctuation of interaction power — depending from his thoughts, mood, recollections and reflections. If one wants, object can lead him to the state of steadiness, harmony, balance of left and right. If not, then, at least it will show him an objective picture of his consciousness functionality. 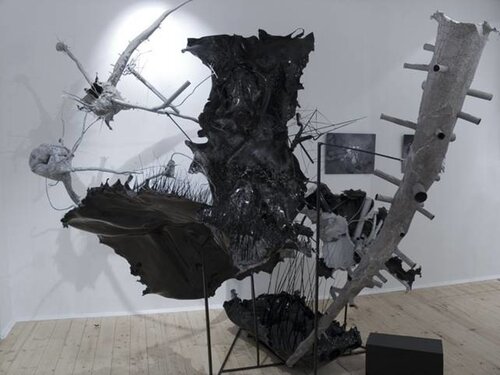 This interactive video project is a kind of art game, where video and audio artists take part. They exchange information. The former give their video works without a soundtrack, the latter suggest a soundtrack, not specially written for a video. Thereby, as in genotype, parts of independent works combine in «Touch Me» to synthesize new work, carrying the sense not similar to the source submissions. 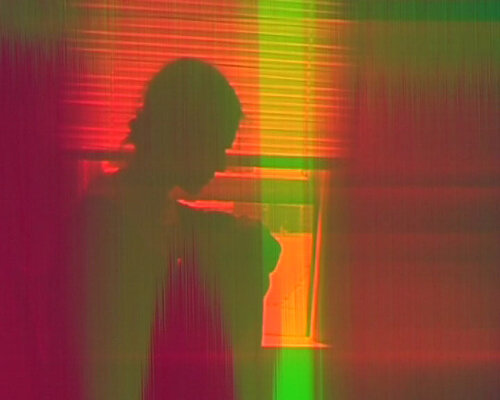 Fragments of video from «Touch Me» project at Sonic Self festival in Chelsea Art Museum, New York, 2008

Performances, demonstrated at the festival opening, – were art experiments in the sphere of new technologies. They showed not only how modern technologies, electronics, cybernetics and virtual reality can be an artist’s instrument but also presented an attempt to understand ther role of technology in contemporary world, made with an artistic approach.

Idea by Anna Frants, programming and graphics by Mikhail Chernov

Viewer moves through the exhibition hall in a helmet with wireless video glasses. Motion sensors are embedded into helmet. Glasses and sensors are connected with computer by radio signal. Sensors catch velocity of viewer’s movement and send signals by wireless network to a computer, where they transform into psychedelic visual pattern. Faster moves the viewer (walks, swirls, dances) , stronger the psychedelic TRIP. 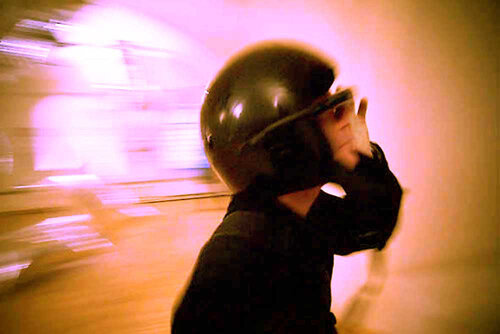 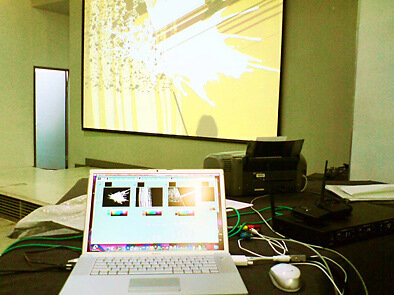 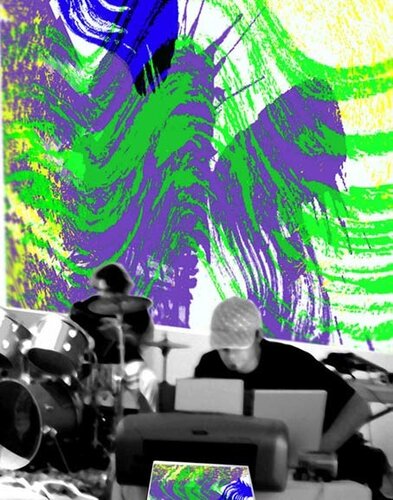 In this interactive media performance, music transforms into paintings and viewer becomes directly involved in process. Computer, running Drumpainting program, registers surrounding sounds and turns them into images – from abstract spots and lines to photos and video films, loaded into database.

During the performance, a human drummer is playing, and rhythms transform into elements of abstract graphics. Merging and overlaying each other, graphical elements create paintings, which instantly change with music. Program interface allows redefining colour and shape of elements and every viewer can do this. Though “picture of music” is changing constantly, one can print and take the image he likes.

Bragophone-party is a performance, a musical action, alchemic experiment and a friendly party in the same time. Bragophone – is a hybrid of a hootch still and a medieval distilling cube, a complex system of large bottles, flasks and retorts, distilling mysterious liquids. This chemical device, turned into musical instrument by Mikhail A. Krest, performs whole symphonies of gurgling, hiss, crackling and sound of falling drops.

Artists Mikhail Krest and Agafia transform collections of old everyday junk into art objects and every space into cabaret… In other words, they show live art in action. 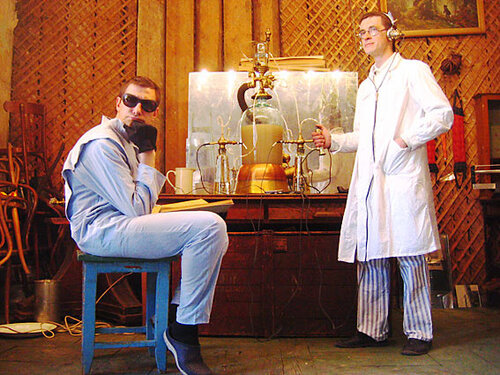 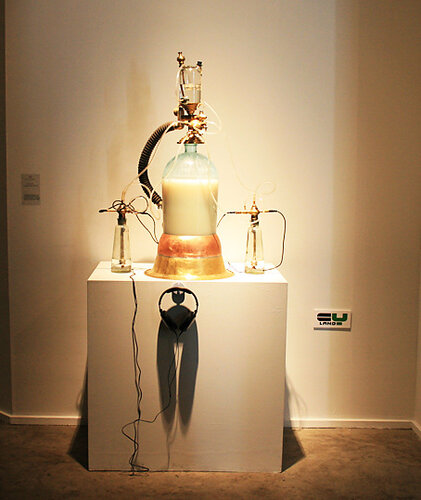 A strategic game, created by Class Wargames group according to the plan, found in archives of an eminent French philosopher, hero of May 1968 Revolution in Paris, leader of situationist movement Guy Debord, reminds a hybrid of chess and strategic computer games, where players develop their own state and make wars with neighbours in the same time. However, in this game players control quite modern reality: factories, offices, and police. The game becomes a metaphor of a contemporary world and suggests understanding its structure on practice. As the contemporary world itself, the game is global: each move instantly transfers to computer and then broadcasts to other players anywhere on the globe. At CYBERFEST we suppose a game between audience in St. Petersburg and players from London and Museumsquartier in Vienna. 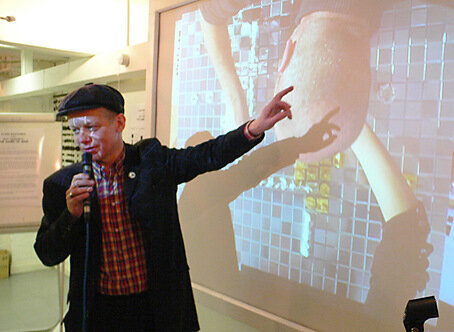 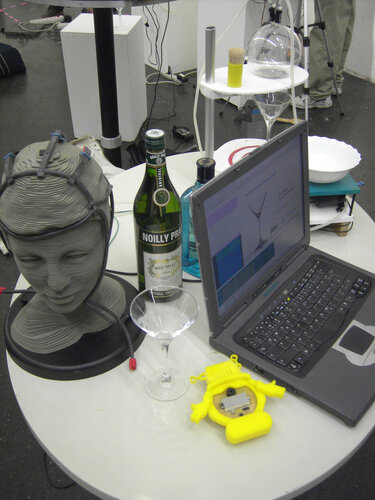 The issue of how much Gin and how much Vermouth belongs into a perfect martini is as old as this classic cocktail itself. Using the Mindreading MartiniMaker, the question is solved by itself now: let the machine determine the optimal mixture directly from your brain-state! With the help of modern Open Source neurofeedback technology, the Mindreading MartiniMaker takes EEG scans from the your brain and composes a cocktail taking into account both: your personal preferences and your current amount of Alpha brainwaves. The more Alpha brainwaves the machine reads, the drier the martini becomes.